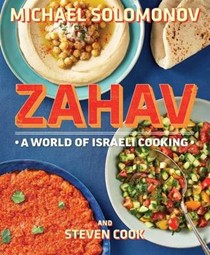 Zahav: A World of Israeli Cooking by Michael Solomonov and Steven Cook brings the highly coveted dishes of the Philadephia hot spot Zahav into our kitchens. Zahav is Hebrew for gold.

Chef Mike was born in Israel but grew up mostly in Pittsburgh, where tahini was always on the table, a marker of his Israeli heritage. “Israelis love tehina like Americans love Doritos and wrestling – unconditionally, but a little irrationally,” he states. Well, I think Doritos are rubbish and wrestling just no. I do, however, understand his point about the irrational love of traditional food and in that regard I have one word: vegemite.

Zahav is a restaurant cookbook that translates well for the home cook. Often restaurant recipes do not execute as they should but that is not the case here. While some of the recipes may require some tracking down of ingredients or performing an internet search for a suitable sub, the book is highly approachable. The Fried potatoes with harissa tehina, Crispy haloumi cheese with dates, walnuts and apples, and the Zahav lamb shoulder all are spectacular.

Zahav reminds us that food is about sharing, cooking together and traditions whether it be Israeli cuisine or a pot of chili with a side of Doritos for the big game (just not wrestling). In our world today, fraught with worry, time demands and exhaustion, it is important to pull up a chair and connect over a meal – now more so than ever.

Philadelphia is the city of brotherly love and Solomonov takes that slogan to heart with his charitable work. He is the real deal. The busy chef is currently promoting his new book Federal Donuts but took some time to answer a few questions about his personal cookbook collection. The events for Federal Donuts can be found on our Calendar. Thanks, Chef Mike for your time.

Q: How many cookbooks do you have?

I have about 75-100, but a lot of them are scattered throughout the restaurants.

Q: Which are your favorites?

Q: Do you remember which cookbook was your first? Both given to you and purchased?

The first cookbook that was given to me was by my aunt and it was Cafe Beaujolais by Margaret S. Fox. The first one I bought was The French Laundry Cookbook.

Q: Which authors do you enjoy most? Why?

I love Joan Nathan because she is an incredibly talented, fundamental voice for Jewish cooking everywhere. Also, John Beshis a great author. He’s got such a soul and his voice really comes through in his work.