Has food become too pretentious?

It’s time again for the predictions of trends for the coming year. According one such list, up-and-coming food items for 2019 include calamansi juice, lichen, and seaweed. Those trends, which feature esoteric, rare, and expensive foods, don’t sit well with The Guardian’s Poppy Noor. She wonders why food has become so pretentious. 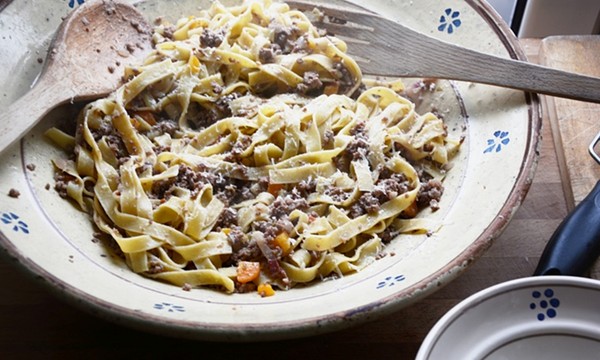 Noor laments the trends toward exotic ingredients that are prized not for their flavor but rather for their exclusivity, with people seeking out the next big thing because a restaurant promotes it as a rarity – with prices to match its elevated status. “Nothing says “that is worth tons of money” more than having to watch a video of how to pronounce something before ordering it,” says Noor.

Honest, comforting food beckons more to her than ostentatious displays of exotic ingredients or the latest health food craze. Spaghetti bolognese, made with a jarred pasta sauce, is Noor’s favorite food. “If the simple food in life could speak, it would be saying: ‘Take me as I am!'” she says. “Lichen, on the other hand, would be begging you not to notice who it once was: a mouldy sea-green, hiding under the surface, trying not to be seen.” I concur with that sentiment.

Photo of Ragu alla Bolognese from The Guardian Cook Supplement