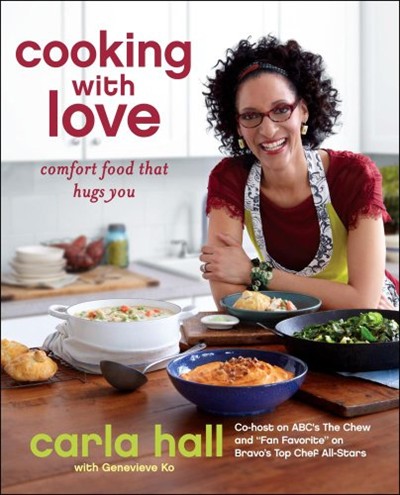 Top Chef alumnus Carla Hall may have developed out a second career as a talk show host, but she’s still a chef at heart. She’s about to open a Brooklyn restaurant (although building delays have pushed back the date), and she has plans to write a third cookbook. She talks about all this and much more in an interview with Eater.

When discussing her current gig, co-host of the daytime talk show The Chew, Hall noted that the show has just completed its 1,000th episode. When The Chew debuted in 2011, many critics didn’t think it had staying power, but the charisma and camaraderie of the hosts, which include chef Mario Batali and Michael Symon in addition to Hall, helped it carve out a niche in the crowded field of talk shows. Hall credits the show’s success to the collegiality of the hosts: “We became really fast friends, and I think that’s the secret to our longevity: We are really friends.”

Hall has written two cookbooks herself and is featured in several from The Chew. She told Eater that she is working on a third book with Genevieve Ko, who helped her write the first two. Don’t expect to see the new book any time soon, as it is still in the early stages. The cookbook “is about the food of Africa and being very proud of it, but also looking at the everyday foods and not the celebration foods,” says Hall.