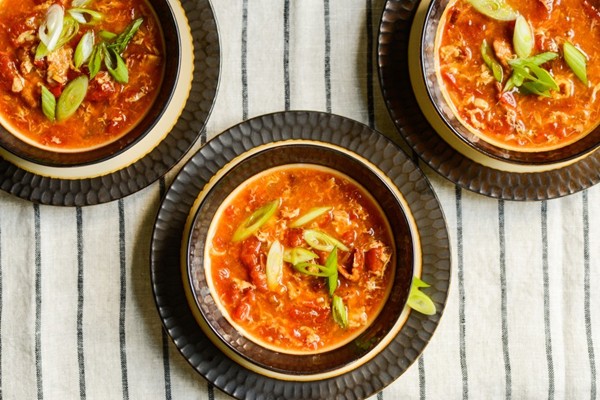 For the past nine years, The Washington Post has held an annual “Top Tomato” recipe contest for its readers. This year they had over 200 entries, and they tested a record 60 of them. Testing this time around resulted in “a record number of near-misses, mostly in cases where we were looking for shouts of tomato flavor but found whispers.” They even fielded a few recipes that omitted tomatoes entirely. (Note to future contest entrants: include tomatoes for your best shot at the prize.)

The top three recipes can be found in the EYB Library. First-place went to 14-year-old Shannon Li of Brooklyn, New York, with Tomato egg drop soup (pictured above). Shannon loves to cook and makes dinner on most nights for her parents and two brothers. The chance to meet star Ina Garten, the contest’s top prize, prompted her to enter. “I find cooking’s a stress reliever,” says the busy high school student.