Quiche by any other name 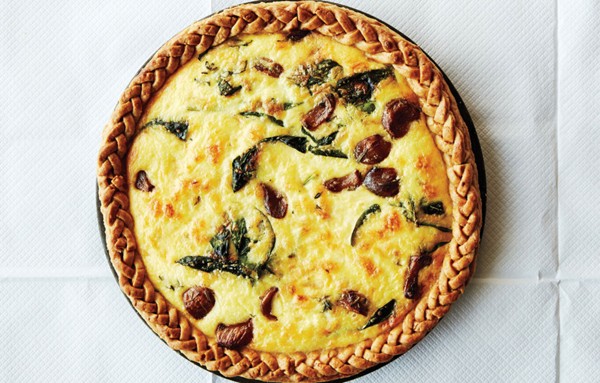 Maybe it was the book Real Men Don’t Eat Quiche, or maybe it was the healthy eating movement, but whatever the reason, quiche fell out of favor over the last decade or two. Indexed magazine Bon Appetit thinks that despite too many “passed mini-quiches that were always cold and tasted like bitter mushrooms,” quiche deserves to be rescued.

It could be said that quiche never really went away, it just got rebranded. Bon Appetit notes that the dish on the cover of its February issue, Caramelized garlic, spinach, and cheddar tart (pictured above), is really a quiche. Says the magazine, “It is called a tart, but it is a quiche (even our food director Carla Lalli Music admits it). Why? By definition, it contains a savory egg custard inside a pastry crust. And it’s absolutely delicious.”

So why aren’t dishes like these, that fit the criteria of quiche, called by that name? It might have to do with the inferior quality of some quiche dishes. As the article notes, sometimes “[t]he filling can be mushy. The crusts are frequently store-bought. The egg is often overcooked. The add-ins are typically underseasoned.”

A good quiche, on the other hand, has a lot of dairy and enough fat to make it luxurious. It should have a good, homemade crust, and the filling should be well-seasoned and cooked separately if need be (like mushrooms that need to shed excess liquid).

The article ends with a plea to reinstate quiche’s reputation: “Don’t let all the bad quiches out there ruin the entire category.” After all, bad versions foods of foods like roast chicken and steak frites haven’t ruined  the reputation of those dishes, so why should quiche suffer?