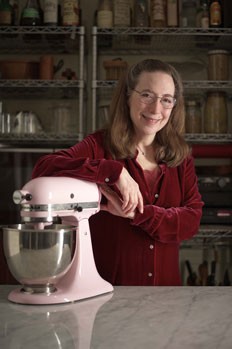 Rose Levy Beranbaum has inspired the endeavors of countless bakers, and her new cookbook, The Baking Bible, hits bookstores tomorrow. (Enter our contest for your chance to win a copy.) More than just a retread of The Cake Bible and The Pie and Pastry Bible, The Baking Bible is a magnum opus filled with all-new recipes for scrumptious cakes, pies, tarts, cookies, candies, pastries, breads, and more.

Food Arts was planning to present the December 2014 Silver Spoon Award for sterling performance to Rose as “the high priestess, dessert diva, and baking pioneer, whose intense mastery of the science and art of baking has changed the way we bake cakes today. She is known for elevating the level of pastry through her meticulous and inspiring recipes, reliable instructions, and scientific precision.”

Sadly, on Thursday, September 11, publisher Marken Shanken announced that after over 25 years in print, Food Arts was closing its doors. Beranbaum has been a contributing editor for over a decade and senior editor Gary Tucker has been working on the text for her award for many years. He was just in the process of updating and finalizing it. Here is what it was intended to be:

Rose Levy Beranbaum’s seminal tome, The Cake Bible, published in 1988, is now in its 52nd printing. It has also been printed in England, Spain, and China. It was listed by the James Beard Foundation as one of the top 13 baking books on “the Essential Book List,” and was included in 101 Classic Cookbooks. It has been sighted in the depths off the coast of Alaska, in a submarine, and at the heights of Katmandu in a book store.

Corby Kummer’s glowing two-page review of The Cake Bible in the New York Times of October 19, 1988 stunned the pastry world, and pastry chefs took notice of her revolutionary method of mixing together all of the dry ingredients, then adding all of the butter and a small amount of the liquid to coat and thereby tenderize the flour, as opposed to the ubiquitous creaming of the butter and the sugar method, which causes all the liquid to combine with the gluten-forming proteins in the flour and often results in a tough texture. In addition to the superior texture and evenness of the cake layers, this also resulted in an easier and faster mixing time with a smaller margin of error.

“I promoted the book mercilessly,” admits Beranbaum with a laugh.  “In those days the publisher did little to promote a book and it could have been buried without my active participation. It’s the advice I still give to all would-be authors.”

“Baking is more about chilling than it is about heating, but it’s all about temperature control,” Beranbaum asserts, once again demonstrating her trademark clarity of vision unfettered by conventional approach. She appears untroubled by theoretical rules, preferring to “get to the bottom of why she prefers the empirical method of relentless recipe testing,” and sharing this wisdom, thus offering the same freedom of creativity. She brings intellect as well as artistry and science to her recipes, which results in a unique vision. Beranbaum is a trend maker, not a trend follower, which adds to her appeal to pastry chefs nationwide who have credited The Cake Bible to their success. It has rescued many a chef in baking emergencies and the infallibly reliable basic formulas have enabled them to evolve myriad creations of their own.

Beranbaum is an inveterate researcher, which has taken her to many countries including the island of Shikoku in Japan to witness the making of Wasanban sugar, and to Budapest, Hungary to be the first person from outside the country to bake in George Lang’s restaurant Gundel, while researching strudel for The Pie and Pastry Bible.

Beranbaum spearheaded the movement to weights rather than measures in an article for her monthly column in the LA Times Syndicate, which she wrote from 1991 to 1998. She received the NASFT Showcase award for the cookbook that has contributed most to educating the consumer about specialty foods.

Beranbaum’s full biography and list of published books is available on her EYB Author Page. All of Rose’s recipes (over 1,500) are indexed in the EYB Library–every cookbook recipe, magazine recipe, newspaper recipe and all recipes from her blog, Real Baking with Rose Levy Beranbaum.