We were delighted recently to have a chance to interview Bruce Weinstein & Mark Scarbrough, authors of the just-published The Great American Slow Cooker Book: 500 Easy Recipes for Every Day and Every Size of Machine. Actually, this is only the  most recent cookbook they’ve written together – there are 21 others from this New York/Texan duo. Mark and Bruce make a fun team – as they’ve written about themselves, “To put it bluntly, Bruce is olive oil; Mark, butter. Bruce wants a Christmas tree; Mark writes the haggadah for Passover. (It makes for interesting times.)”

As the following highlights, they also have some solid opinions. (And besides the interview, they’ve offered our members 5 free copies of The Great American Slow Cooker Book; just post a blog reply on the contest page here.)

EYB: In the past there was some snobbery about crockpots and slow cookers.  Do you think that has passed?

Actually, no. But we hope we’re part of the trend to undo some of that unwarranted snobbery. We wrote a book in which we nixed almost all the bad shortcuts–cream of celery soup, for example–and instead used the real food found in our rural New England supermarket. Sure, some people haven’t had fenugreek before, but it was certainly on the spice rack at our market. But we certainly didn’t take the recipes to the other extreme: everything fussed over and fetishized until you’ve lost the convenience of the appliance. Yes, we brown meat (sometimes) outside the cooker but we also feel free to use canned tomatoes and broth, convenience products that don’t up the chemical signature of a dish.

EYB: Are there some dishes that you think taste better in a slow cooker then slow-cooked in the oven?

Chicken thighs. There’s something about the way the slow cooker melts the cartilage and fat evenly, resulting in far more luxurious bits of poultry goodness! And beef short ribs. They almost melt! Because neither has been at a boil or even a simmer, they hold their shape perfectly, decadent cuts from a down-home appliance.

EYB: And are there any slow-cooked oven dishes that just don’t work in a slow cooker?

Of course! A slow cooker doesn’t mean you get to use your oven for sweater storage. A slow cooker won’t make crunchy beef or pork ribs the way you can make them on a baking tray in the oven. And a slow cooker will never caramelize tomatoes into little bits of vegetable candy. But most braises and stews–with the proper adjustments (less moisture, less fat, less salt)–will become just as luxurious in the slow cooker as in the oven. 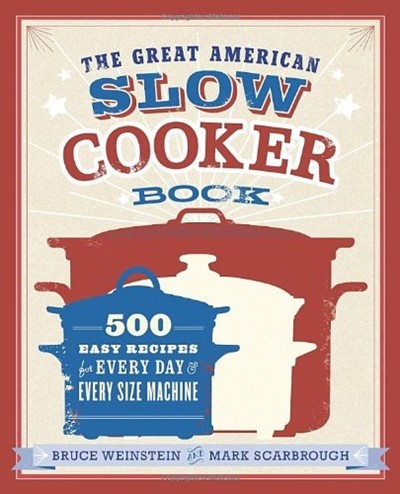 EYB: How has the technology of slow cookers changed in recent years?  What important new features have been added?

We believe these are the biggest changes since the original models: 1) a built-in timer to make cooking easier, 2) the keep-warm setting which will hold most stews or braises at a safe temperature for several hours, and 3) the increased heat of “low” and “high.” That last is very important. Older recipes may not be calibrated for the newer, higher temperatures. These new temperatures are actually in line with current food-safety guidelines–so there’s no threat of bad pests from improper cooking. However, the modern cookers definitely work at higher temperatures–which means food’s done faster, sauces need a little more liquid, and pork tenderloins should be done in the oven quickly, not in the slow cooker.

EYB: Do you think owners of slow cookers realize the huge range of dishes that can be slow-cooked?  How will your book expand their repertoire?

Most people don’t know that the best steel-cut oatmeal comes from a slow cooker. Set the machine up the night before and you wake up to a whole-grain breakfast. How terrific is that! And most people don’t know about baking in a slow cooker. You can pour the batter right into the cooker for some recipes and use it as a very moist-heat oven. Or you can use it as a countertop bain-mairie for puddings, custards, or pot au creme.

EYB: What dishes in your book do you think will surprise people that they can be made in a slow-cooker?

Brownies. Rice porridges. A one-pot turkey and stuffing recipe. And an old-fashioned shrimp boil. Seems like those are a long way from mac-and-cheese!

EYB: Were there any dishes you tried when creating the recipes for this book that didn’t work?  Any disasters?

Okay, the truth. We couldn’t really get a soufflé to work, despite repeated attempts. We thought that the moist environment would give us a luxurious texture in a chocolate soufflé. But we mostly ended up with collapsed chocolate scum.

EYB:  You two are life and work partners – how do you make sure that you aren’t always working?

We don’t. It seems we’re always working. With twenty-two cookbooks in fourteen years (not counting those ghost-written for celebs), we’re always in the kitchen. But the most important thing we’ve learned is the way to keep creativity alive inside the relationship. (Someday, we want to write a book on that!) We’ve had to discover ways to instigate, nourish, and sustain creativity in each other. It’s very easy for a creative relationship to go dead over time–in the office, between script writers, among publicists, within a chef’s kitchen, and in our home, too. It’s the biggest challenge of our career–and one we’ve managed to negotiate so far. But there’s more work ahead! (And more books, too.)