It’s well known that millenials like all things pink: pink clothing, pink wine (rosé is all the current darling in that demographic), and all kinds of pink foods. Now another item is joining the fray in taking on a blushing hue to appeal to millenials – pink gin. 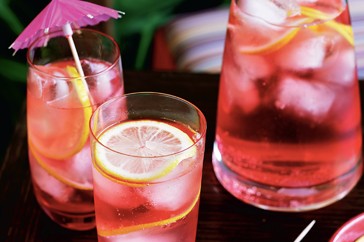 Unlike the neon vodkas and liqueurs that dominated in the early 2000s, pink gin is much more than low-grade alcohol tinted with food coloring. Esteemed distilleries like Beefeater are introducing subtly flavored and colored versions that offer hints of strawberry, rhubarb, and bitters. Beefeater’s master distiller Desmond Payne took a cue from the company’s founder, James Burrough, who tinkered with items like raspberry gin and cherry brandy.

As that example illustrates, pink gin, while pleasing to behold, isn’t exactly new. A cocktail called the Pink Gin, which combined gin and Angostura bitters, dates back over 150 years and was a favorite of the British Royal Navy. Distillery Gin Lane 1751 used that drink as the inspiration for its upgraded spirit called Victoria Pink Gin, which derives its hue from spiced bitters.

Tiny craft distilleries and mega producers alike are now selling pink gins, which produce Instagram-worthy cocktails that are actually worth drinking. If you’re wondering what to make the new crop of rose-hued gins, most of them can be used in any cocktail calling for a dry gin. “Pink gin can be consumed the same way London Dry is consumed,”  says Gin Lane 1751 founder Geoff Curley.