Some cookbooks become icons that are passed down from generation to generation. One such tome is the Australian Women’s Weekly Children’s Birthday Cake Book, first published in 1990 and reissued in 2011 as a collector’s edition. The book has inspired countless people to attempt baking a birthday cake for their child, eventually passing the book down to their grown children who use it to make the perfect cake for their kids too. 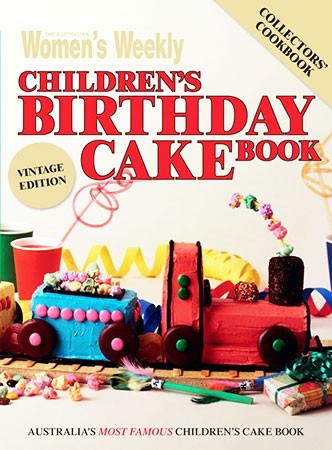 In an utterly charming video produced by ABC as part of a series entitled “Throwback”, author and baker extraordinaire Pamela Clark takes us back to the AWW test kitchen where it all began. She recounts the struggles she and her team had to go through to get the book published, as her bosses were not convinced that a book dedicated to such whimsical creations was worth pursuing. Clark and her colleagues would make the cakes, drawing inspiration from various childhood toys and stories, during their off time at the magazine. Many of the original images in the book were shots of the first attempts, which often included many mistakes.

Clark regales us with behind-the-scenes stories, and shares with us her favorite cake from the book, the Dolly Varden cake. She likes it because it is easy to make and it can be modified to suit current themes – she’s even done a tattoed, goth version. There is one cake that Clark advises you to skip, however: the tip truck cake. “Bitch of a cake,” she says. “Don’t go there. Glue the pages together – forget it.”