I grew up eating cranberry sauce once a year, and it was always of the canned variety. The sauce was pushed out of its cozy can into a narrow serving bowl, its rings used as a marker with which to slice the jiggly substance. As far as I can recall, only about two slices were ever removed from the bowl, with the remainder going into the leftovers bucket that was given to the chickens, who gladly feasted on the sauce and any other bits remaining from the Thanksgiving dinner. 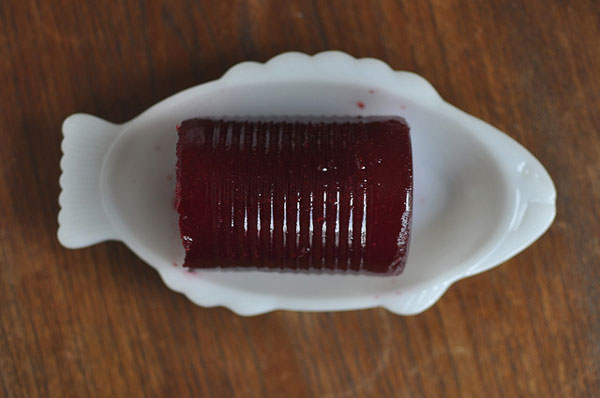 Once I discovered the that not only was it extremely easy to make homemade cranberry sauce but it was far superior to the canned variety, the cans were banished from our Thanksgiving dinners. I much prefer the taste and texture of the fresh version, although I am not sure all of my guests agree. It seems they may be in good company, because even some chefs choose the canned version over homemade, according to an informal survey from Food and Wine.

While many chefs preferred homemade sauce over its canned counterpart, the decision was far from unanimous. Says David Bancroft, executive chef at Bow & Arrow and Acre “‘If it ain’t broke, don’t fix it!’ I was so proud of my homemade cranberry sauce. I found it pushed to the farthest corner of the table where it was in nobody’s way.” Other chefs said that while they actually preferred canned, they would never serve it at their own restaurant.

Some people couldn’t decide and said they liked to have both versions available for guests.  Michael Wilson, executive chef at  Domenica says “I actually put both on the table. I love how tangy canned sauce is, and the texture is something I enjoy. The kids at the table typically agree. However, making your own is fun, easy, and there is a lot of room to experiment and play with flavors. I like to cook fresh berries down in orange juice with a lot of brown sugar and grated ginger.”

One chef says that neither version is worth the effort. After making putting both types on the table and having hardly any takers for either, chef  Erik Niel has nixed them entirely. Where do you stand on the cranberry sauce debate: Team Canned or Team Homemade?

Photo of Home “canned” cranberry sauce made in a tin can mold from Food in Jars by Marisa McClellan (maybe the best of both worlds?)