Learning about an ingredient the hard way 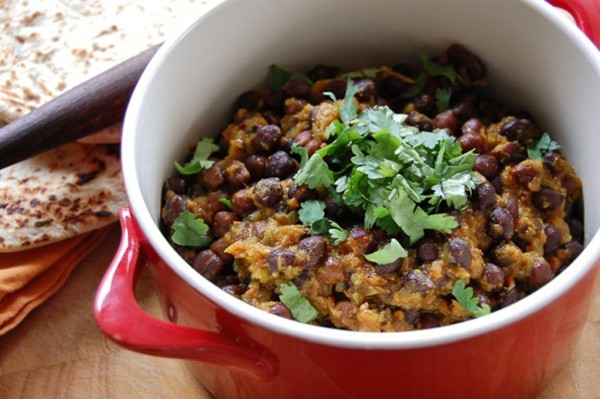 It all started with a trip to the newly-opened gourmet market. The small space it occupied in a charming old exposed-brick storefront was packed with an array of locally-grown produce and ingredients not frequently seen in our small town. Naturally, this unexpected variety made me almost giddy. I loaded up my basket with all manner of interesting produce, grains, and legumes, including a bag of black garbanzo beans, aka black chickpeas, anticipating a new twist on the falafel I had already planned on making later in the week.

That’s when the trouble began. Instead of researching recipes in the EYB Library or even Googling the unfamiliar ingredient, also known by its Italian name of ceci neri, I just winged it. I proceeded with my usual recipe without deviation, figuring a chickpea was a chickpea. How wrong I was. Following the customary overnight soak, I drained the beans and threw them into a food processor. The jarring sound they made as they hit the bowl should have been my first clue that something was amiss.

Ignoring this obvious evidence, I proceeded apace and pulsed the beans a few times. A distressing amount of noise emanated from the machine, and the pieces of chickpea remained quite large and distinct. Nevertheless, I stubbornly stayed the course, thinking that perhaps the beans just needed a bit more time to achieve the proper texture.

After several more pulses, I finally admitted to myself that I had made a terrible mistake. Some of the chickpeas had broken down into an acceptable texture, but the falafel mixture was peppered with rock-hard chunks of raw chickpea. Sighing, I spent the next half-hour squeezing the mixture to find and remove the offending pieces. The upshot was a reduced yield of edible yet overly crunchy falafel. I debated throwing away the remaining beans, but ended up chucking them into the pantry, although I was in no mood to use them again any time soon.

Then, today, I spied an article from Taste Cooking that succinctly explained the inherent toughness of ceci neri. If only this had popped into my Twitter feed three weeks ago! I suppose that it sometimes takes an unwelcome outcome such as this to provide a necessary reality check on one’s knowledge and ability.

It always pays to do a bit of research before using an unfamiliar ingredient, even if it is in the same family as one you’ve used before. Before I embark on another recipe featuring a new-to-me food product, rest assured that I will search the EYB Library and perform a quick Google query. Thanks to the linked article, I have confidence that the next dish I make with these beans will turn out much better than the first. Perhaps I will try the Black chickpea curry (Kaala chana) from The Indian Slow Cooker, pictured above.