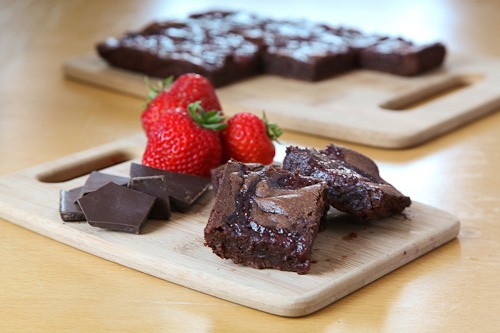 Can you think of three foods where any two of those foods taste good together, but all three combined taste disgusting? That’s the philosophical thought problem deemed the “Incompatible Food Triad”, which seems to have been first pondered by Wilfrid Sellars, a University of Pittsburgh philosopher. Sellars used to bring the problem up over dinner with his students and colleagues.

So far, no one has been able to find an unequivocal solution to the problem, but Atlas Obscura recently tested several potential triads. They assembled strange combinations like Strawberry-Mushroom-Balsamic (which they made into a tart), Beef-Orange-Cream (made into pot pie bites), and Chocolate-Strawberry-Garlic (which were put into brownies).

You would think that garlic in brownies would *have* to be incompatible, but several of the taste testers thought the brownies were great – one even said it would rank in the top five of brownies they have eaten. Some of the other triads were closer to being a solution to the thought problem.

Hat tip to EYB Member sir_ken_g for sharing this story with us. If you ever see a food or cookbook-related post that you think our Members would like to see, feel free to email me with a link at darcie@eatyourbooks.com.