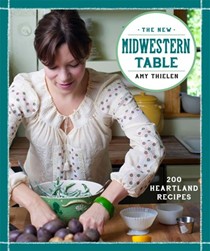 I am a Midwestern girl in my heart. I grew up in a small steel town in Southern Illinois near St. Louis, Missouri.  Even though I long to return to New York, having lived there for fifteen years, the grounding stability of the Midwest is in my blood. The MIdwest has a reputation for meat, potatoes and bread – yet we are so much more than that and we have Amy Thielen to thank for bringing Midwestern cuisine to everyone’s table.

As I mentioned in my promotion of Amy’s memoir Give a Girl a Knife (a must read), I was thrilled to discover her back in 2013 and loved the focus on modern Midwestern cooking. Her book The New Midwestern Table: 200 Heartland Recipes is incredible – not a bad recipe in the collection and I’ve made at least half of them. Favorites include her Best-ever beer cheese soup, Classic beef pot roast with pistachio salt (that pistachio salt makes the world go round), and Rosemary-infused brown butter chicken breasts (some of my photos are uploaded at these links). Her famous Maple bread with soft cheese is something I turn to on Sunday mornings and a reason I am never without sourdough bread, maple syrup and butter (you don’t need the cheese – it gilds the lily). I had to start a group to cook through her book way back when.

I reached out to Amy about featuring her here on our Cookbook Stackup posts and she was gracious enough to answer some questions in the thoughtful way she approaches everything in life. Thank you Amy and I am over the moon excited about another cookbook from you!

Q: Can you tell me what cookbook was your very first?

As a kid I remember reading and rereading my mom’s orange Betty Crocker cookbook. . But she didn’t really own a lot of cookbooks. She had a recipe box full of index card-recipes and magazine clippings, and a collection of ring-bound community and church cookbooks. But it really wasn’t until college, at Macalester in St. Paul, that I discovered the cookbook world. In addition to my English lit classes I was taking a lot of sustainable agriculture and women’s studies and sociology, and somehow my research on farm women’s diaries and early-American cookbooks led me to 1950s housewife cookbooks and then to contemporary American cookbooks. It was the beginning of my hippie-homesteader phase. Within a year of graduation, I’d move to a nonelectric cabin in the woods and garden and cook my brains out, but the cookbooks that gave me that inclination to do that were Alice Waters’ Chez Panisse and Deborah Madison’s Vegetarian Cooking For Everyone. Blending the two together, I made so many whole-wheat pizzas topped with greens and roasted garlic. And so much roasted squash soup. Soon after that I found Marcella Hazan and Madeleine Kamman, who had a more European-edged authoritative writing style that really spoke to me. They wrote the way my mom and grandma talked; their witty bossiness earned my trust. I think it’s fair to say that my obsession with Madeleine Kamman’s The Making of a Cook began in 1997 and continues to this day. The woman was an absolute genius, and had a cooking knowlege that spanned from her French family roots to the world of haute cuisine. She knew everything, from classic French food like duck confit, to cream-based country French dressings, to the (then-new) California-style restaurant food. She had a restaurant in Boston, a cooking show on PBS, and wrote so many wonderful books. When French Women Cook is my favorite. It’s a memoir, basically, stories of the French women who influenced her, with 200 recipes, and my copy is all flagged up. Someday I will make her walnut bread, a recipe from the Savoie that calls for a full cup of butter “lees,” the brown bits you skim off when making clarified butter. She’s totally my hero.

Q: How many are in your collection right now – and can you provide a photograph to share?

I have about 350 cookbooks at last count, although it’s difficult to count them. They’re spilling out of the shelves right now, lining the staircase to my office, and forming precarious mountains at my bedside. It’s really getting out of control. I went through them this summer to cull out the ones I might be able to give away, and came up with a pile that numbers exactly eight. And they’re still sitting there, because it’s really hard for me to give up my cookbooks. When I die, I want to donate my collection to a library, but they’ll have to take them knowing that the margins are written in and the back jackets are covered with sketches for menus and grocery lists and to-do lists. I have a bad habit of writing in my books, but I think it’s just a testament to how much they are a part of me. I own them, but really, if you look at my house you’ll see that they own me.

Q: Who are your favorite authors right now?

Just yesterday I received Cheers to the Publican in the mail, and I think it’s a fabulous book-well-written and as full of amazing vegetable dishes as it is sausage. I adore pretty much anything Nigel Slater does. although Tender is one of my favorites. He ties his food to mood so beautifully, and cooks the way I do on a regular weekday night: with love, and common sense, and from the ingredients that lounge around my kitchen. And his sentences are like poems. In recent years I’ve also loved Alex Raij’s The Basque Book; it’s such a deep dive into a cuisine I don’t know that well. And Nancy Hachisu’s Japanese Farm Food. And Vivian Howard’s Deep Run Roots. And the Matt Lee and Ted Lee’s The Lee Bros. Southern Cookbook. And The Art of Living According to Joe Beef. I also recently reread Judy Rodger’s The Zuni Cafe Cookbook, which is a masterpiece. Full of wisdom and good sense and a million brilliant recipes for using up stale bread, which everyone needs.

Q: Are there plans for more books?

I’m working on a cookbook right now, and I’m really excited about it. I feel like I’ve been a hoarder with my recipes for the past six years, holding all my best recipes close to my chest like a good poker hand, and I’m so thrilled to be writing them down and eventually publishing them. I can’t give any more detailed info about that, but will keep people updated on my social media channels, Facebook and Instagram mainly.