Lucky foods for the New Year 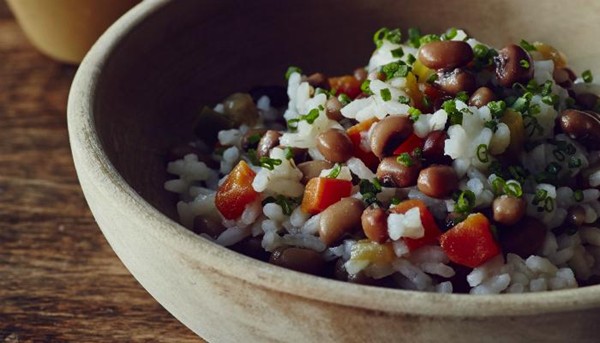 Half the world has already celebrated the New Year while the others are counting down the hours. After waking up the next day (if you feel like eating, that is), you may celebrate with a traditional meal of ‘lucky’ foods meant to help bring good fortune for the coming year. The traditions vary depending on where you live.

Grapes play an important role in Spain, where revelers consumer 12 grapes just as the clock strikes midnight, each grape representing a coming month in the new year. If you get a sour grape, it might represent a rocky month. This ritual has been happening for over 100 years and has spread to nearby Portugal as well as former Spanish and Portuguese colonies.

Beans and greens are other traditional New Year’s foods. It’s thought that the greens represent paper money and the beans resemble coins (as in the Lowcountry hoppin’ John from Heritage by Sean Brock pictured above), so eating a large quantity will increase your fortune in the coming year. These two foods can be found in the rituals of many cultures. Other cultures use different legumes like lentils in place of the black eyed peas used in the US South. Pork and cabbage, often served together, are also popular in many countries.

Conversely, a few items are associated with bad luck and people are encouraged to avoid these foods on New Year’s, including lobster and chicken. These creatures move or scratch backwards, respectively, which could be intrepreted as being a setback. Are you eating a traditional ‘lucky’ meal this New Year’s Day?