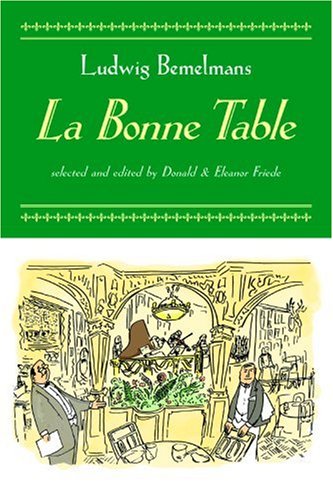 The gifted and exuberant Ludwig Bemelmans was trained as a boy for a career as a restaurateur, but ended up as a writer as well as an internationally known gourmet. One of the author’s most beloved works, La Bonne Table, is in effect his gastronomical autobiography. The entrancing memories and charming pictures assembled in the book transport the reader behind the scenes of the great hotels of Europe and America – including the immortal “Hotel Splendide” – and such restaurants as the Tour d’Argent in Paris and Le Pavillon in New York. Bemelmans muses over great menus and great eaters – and soon makes the reader very hungry.

While La Bonne Table enjoyed interest among collectors long after its initial 1964 publication, it regained the attention of a broader audience after a proclamation by Anthony Bourdain in an episode of The Layover that was filmed in NYC’s Kitchen Arts and Letters. It was there that he exalted Bemelmans as a must-read author. Bourdain’s pronouncement drove up the price of remaining copies of the book, which was last reprinted nearly 15 years ago.

If you’ve been wanting to get your hands on a copy of La Bonne Table but were daunted by the $100+ price tag, you’ll be delighted to learn that Boston publisher David R. Godine is issuing a handsome paperback reprint that includes all of Bemelmans’ illustrations from the book’s original edition. It’s available for preorder through Kitchen Arts and Letters for $17.95, with shipping expected at the end of the month. US customers who order before July 25 will receive free shipping. Foreign shipping is also available, and non-US customers should email the store, which will work on getting you the best possible shipping price.