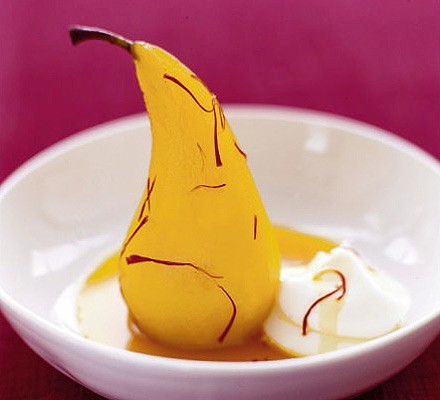 When you think of saffron, you probably think of foods like Persian jujeh kabob, Spanish paella, Morroccan couscous, or Afghani pulao. But it’s also an important part of the American Mennonite culture says Saveur Magazine, which explores the declining practice of saffron growing in rural Pennsylvania.

While most commercial saffron production takes place in Afghanistan and nearby countries, for hundreds of years it was also grown in the United States. Saveur spoke with Justin Hulshizer and his neighbors, descendants of Pennsylvania Dutch (from deutsch, or German-speaking) Mennonites who settled in the area over 300 years ago. Their cuisine features saffron in a number of dishes. “Until I was twenty-one, I didn’t know that all chicken potpies and bread stuffing weren’t colored yellow,” Hulshizer says.

He is one of the last holdouts who grows his own saffron from corms, in seven raised beds over the cement driveway beside his house. There are many reasons the crop is no longer grown commercially in Pennsylvania. But the stubborn few like Hulshizer carry on the meticulous process of hand-harvesting and drying the threads so they can add saffron’s distinctive flavor and color to their foods. If you think growing your own saffron sounds romantic, you may want to consider this: from his seven raised beds, Hulshizer only gets about 15 grams of saffron in a good year.