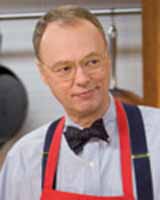 Another shakeup in the food world caught many people off guard. Today the Board of Directors of Boston Common Press (parent company of America’s Test Kitchen), announced that Christopher Kimball’s employment with ATK is ending. Kimball was one of the founders of Boston Common Press, which started with a single publication, Cook’s Illustrated, back in 1992. While Kimball’s departure is effective immediately, he will still be the host of the 2016 seasons of the America’s Test Kitchen and Cook’s Country television programs.

A contract dispute is blamed for the breakup. David Nussbaum, CEO of Boston Common Press, said in the announcement that “We made every effort to offer Chris a reasonable contract that reflected his significant contributions to the company and are disappointed that we could not reach agreement.” Grubstreet reported that were signs of a big change in the company earlier this year, when “Boston Common Press essentially surprised Kimball with a boss back in September – the company’s first-ever CEO, a media executive from the outside.” While Kimball hasn’t said anything about the breakup, rumor is that he and his wife are considering forming their own company.

Other new additions to the Boston Common Press management team were announced last week, including the naming of its first Chief Digital Officer. Jack Bishop was promoted to to Chief Creative Officer. He will be “responsible for the creative strategy of the America’s Test Kitchen television program, Cook’s Illustrated magazine, Cook’s Country magazine and television show, and America’s Test Kitchen’s digital and book content, as well as for new projects.”

Reaction by fans has been mixed. Some lament Kimball’s departure, feeling that the soul of the programs is being removed. Others, however, are not disappointed to see Kimball go, as they felt that his folksy missives and no-nonsense demeanor had outlasted their appeal. What do you think of this development for ATK and CI?