The year has come and gone, and along with it the rising and falling tides of popular cookbooks, the best of which appear in EYB’s awesome comprehensive list.  Every year, there are a few cookbooks that catch my eye but for one reason or another don’t make it onto the Big List.  I vow to spend more time with them when I can.  But every time, the new year arrives with even more exciting books, and these quiet beauties fade away in my mind, usually to be forgotten until a random dinner search on EYB turns up a recipe for me to try.

So, one last lingering glimpse at some promising contenders that I didn’t quite get round to submitting to the full gamut of testing, review, and praise, but which have a good shot of making their way down to the favorites shelf in due course:

My Perfect Pantry, by Geoffrey Zakarian.  I may have only dipped into this book a few times, but each foray yielded juicy, vivid, and fast results.  Hardly anybody besides me took any notice of it, but I remain convinced that it was one of the most underestimated titles of the year.

Robin Robertson is as reliable as ever, and a whole lot more adventurous than many, in her new vegan book: Vegan Without Borders. Meat substitutions in soy and sprouted grains, purchased equivalents for non-vegan flavor staples. 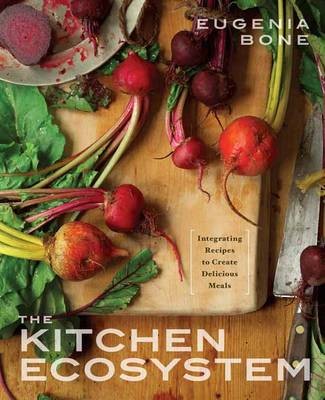 The Kitchen Ecosystem by Eugenia Bone is the kind of book you have to make a commitment to, breaking down each ingredient into every usable component it has and extracting its value through every kind of cooking and preserving technique imaginable.  Also, Fermented Vegetables by Kirsten and Christopher Shockeyv- a summer sleeper for the crop-conscious which I also didn’t have the dedication to test.

Vegetarian for a New Generation, by Liana Kissoff has ever-surprisingly-bold new ways with familiar produce – like a stockpile of scarves, hats, and accessories that makes an old wardrobe new again.

Ovenly is one of those Cute Baking Books –  a bit of merchandising for a small Brooklyn bakery.   Nonetheless, it offers high VPR (Value Per Recipe) and good results for the home baker.

Finally, a pair of better-known titles which also are not on the Big List:  Andrea Nguyen’s Banh Mi Handbook, which everyone and her brother gave to their street-food-loving relatives for Christmas.  And Shroom, by Seattle’s Becky Selengut, which missed most people’s top 10 lists by coming out late in the year, but which is a not-to-be-missed treasure for fungi devotees.

Do you have any 2014 favorites which everyone seemed to miss?