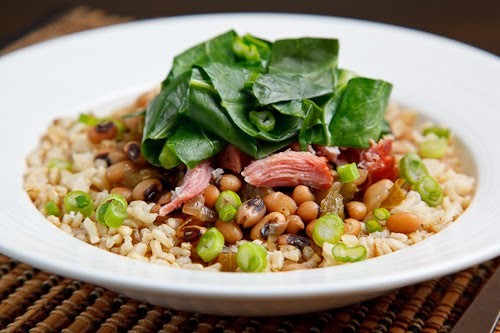 Celebration food is often symbolic, whether due to a religious tradition or a secular one. The start of a new year, representing new beginnings and opportunities, is rife with symbolism in food, much of which is designed to auger wealth and good fortune in the coming months.

Leading the charge in this arena are black-eyed peas, especially in the American South. David Tanis of the NY Times notes that the tradition of eating legumes for luck dates back to Sephardic Jews, who ate beans at Rosh Hashana. It’s unclear how or even whether this is what prompted the tradition in the southern United States, but it has been such since Civil War times at least. Beans are considered lucky foods because their shape is reminiscent of money.

Food that is the color of money has also been ascribed good luck, so Southerners double down by adding greens or cabbage to the black eyed peas. Some families even cook silver coins in with the dish. The person who receives the coins has extra prosperity for the New Year. This practice nods to New Orleans’ king cakes of Mardi Gras.

In Asia, long noodles signify long life, since the noodles are not cut or broken. Round fruits also symbolize money and are viewed as good luck foods in both Europe and Asia. The fullness of a pomegranate is thought to portend what the New Year will hold for the eater. Another round food that is viewed as lucky is cake.

Finally, in countries like Hungary, Cuba, Portugal, Spain, and Austria, pork is associated with prosperity as these animals never move backward and always forage in a forward direction. (I’ve never noticed animals that don’t do this, but who I am to judge the tradition).

Do you eat any traditional lucky foods for the New Year?

Photo of Hoppin’ John from Closet Cooking by Kevin Lynch