This is me in the kitchen: Hair up in a messy ponytail.  An apron that is laundered but nowhere close to white.  Scuffed clogs and glasses spattered with something or other.

This is Mimi Thorisson in the kitchen.

And by the way, she has five kids.

You EYBers are a kinder lot than I, and you may find the beautifully packaged and shot A Kitchen in France: A Year of Cooking in My Farmhouse inspirational.  “Lean in, Chang!  You too can make a picture-perfect gâteau basque and chou farci while still maintaining a perfect blowout and not spilling wine on your neutral-tone ballet flats, which, by the way, don’t make your calves look stubby at all!”

I know, I know.  A cookbook is highly edited merchandise, and nobody really looks like that at crunch time.  Still, I can’t help but feel that it’s one more straw on the camel’s back when it comes to female perfectionism in our time.  Be a great mom.  Run an immaculate household.  Maintain a fulfilling job.  And smile!

Also, I worry that a hair is going to fall in the soup. 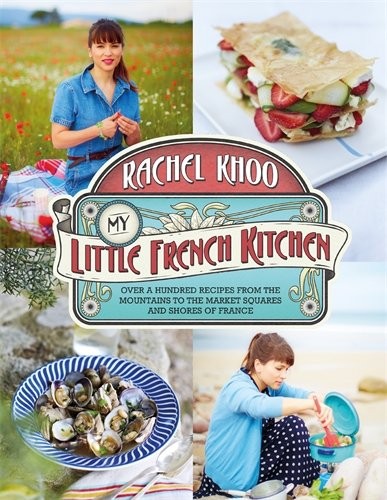 Of course, French women have always had a monopoly on a sort of easy grace, whether in the matter of tying a scarf or simply not getting fat.  It was probably inevitable that European TV would follow in the footsteps of American TV and seek out fresh, rosy faces for culinary broadcast – Thorisson has a show on France’s Cuisine+, Rachel Khoo (at right) had one on BBC and the Cooking Channel.

(And Khoo’s My Little French Kitchen isn’t just charming visually – it’s an interesting tour of regional styles, even if the recipes are a little on the fussy side for me.)

There’s room for a bit of fantasy in cookbooks.  If we were all realists, we would probably own a much more reasonable number of cookbooks, and we would never be 2 hours late with dinner because we tried something a little too ambitious.  But just once, I’d love to see a book showing one of my kitchen sisters in all her bedraggled glory – shirttails flying, hair mussed, cheeks dusted with flour.

I’d clean my glasses to get a closer look.  And then I’d smile.  Not a camera-ready, scrubbed and toothy professional smile – a real one.