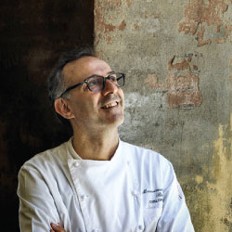 Food lovers are eager to learn about their favorite chefs’ opinions, techniques, and paths to culinary success. Even if we don’t have the opportunity to eat at their restaurants, for some chefs we can catch a glimpse of them through their cookbook writing. Soon Netflix will make it easier to discover what makes world-famous chefs tick with a documentary series set to debut next year in all markets where Netflix is available. The series will first focus on Massimo Bottura, founder of Modena’s Ostera Fancescana and author of Never Trust a Skinny Italian Chef (coming soon to a cookbook store near you).

Other chefs to be profiled include Sweden’s Magnus Nilsson, Ben Shrewry of Attica restaurant in Melbourne, Dan Barber of Blue Hill in New York, Buenos Aires chef Francis Mallmann, and Niki Nakayama of N/Naka in Los Angeles. This is the first documentary series commission by Netflix, and director David Gelb (best known for the award-winning Jiro Dreams of Sushi) will be overseeing production.

Photos of Massimo Bottura and Francis Mallmann from the EYB Library