Author of the iconic Moosewood Cookbook, Mollie Katzen has been publishing almost continuously since the debut of that culture-changing first book.  But her most recent title, The Heart of the Plate, stands as a testimony to the way eating culture itself has changed both for the author herself and for ourselves as a country over more than 35 years.  And we’re delighted to be able to give away three free copies to EYB members – just post a reply to our cookbook giveaway blog.

We talked recently with Mollie about the new book, her relationship with vegetables, and her evolution as a cook and an artist.

On her childhood food influences:

I grew up in a kosher home, with that sense of separation between meat and milk.   Each week we had one night without meat:  “the dairy meal”.  On dairy night, instead of the meat, the vegetable, we’d have 4000 things – this groaning, laden table filled with everything.  Instead of one hunk of meat in the center of the plate, my mom would make one package of frozen vegetables, like those French cut green beans. Even then, I wanted more vegetables.  One package, for 6 people!  Eventually I got my mom to make TWO.

I had restaurant jobs starting at age 15.  When I left home to go to college, I stopped eating meat.  I went to Cornell, where because of the ag school, there were these amazing vegetables. At college I got food jobs as work, scraping plates at this little macrobiotic cafe.  All the food was beige – tamari sauce, onion…but I’m omnivorous and I was very bushy-tailed – I loved it all.

Moosewood Restaurant started with my brother and a couple of friends – I was only there the first 5 years, 1973-1978.  We had no menu, lunch was a dollar, we all cooked what we knew how to make.  There were no recipes and no standardization –  a customer would come in and say “I had this great soup last Thursday” and we had no way of re-creating that.  It finally occurred to me we should have some consistency.

There were three reasons I did the cookbook:  1) I wanted to standardize the cooking; 2) I wanted to be able to give recipes to customers who asked for them; and 3) I wanted to give ideas and support to the mothers of my friends who had gone off to college and come home vegetarian.  At first it was just a photocopied version of my handwritten notes.

At the time, a big part of it was meat replacement.  That hunk of casserole needed to be filling enough, held together with cheese or eggs, to get people fed.

On why she writes cookbooks:

As someone who’s been writing cookbooks full time for 40 years, I’ve always been juggling the idea of the cookbook – what’s it for?  Are we trying to mold people’s taste? Or telling them how to cook?  Are we influencers? Or providers?

I wrote Get Cooking for beginners – my son, who was in his first apartment, wanted some basics: How do you make a dressing? How do you make a burger? How to roast a chicken?  I enjoyed it so much though I got some criticism for including meat.  But my goal is to teach people how to cook.

On how her cooking evolved over the years:

I was so young when I started the Moosewood Cookbook.  In the field of food writing and food education, I was not at the peak of my knowledge, but right at the beginning.  I didn’t know it would be a learning curve. If you’re curious, and you pay attention, you automatically keep learning. I’m very passionate about plant-based food.  There’s not a plate of vegetables that I’m not curious about.

But my goals have shifted.  In 1973, it was a novel concept to have any kind of meal, especially dinner, that didn’t have at its center a piece of meat.  I had an infatuation with plant-based food.  But it wasn’t in our vocabulary.  The title of my book, The Heart of the Plate, is meant to gently rearrange that idea of the center of the plate – but we’ll talk more about that later.

My cuisine has been steadily marching in the direction of featuring vegetables – not just on the side.  It could be a pilaf where the vegetables and nuts and accoutrements outnumber the rice, or a lasagna that’s layers of roasted vegetables.

When I first started writing, I would load as many ingredients into the recipe as I could. I wanted to have long lists of ingredients, I wanted them to be fun and clever and complex.  I think they tasted fine and ended up being popular.  It was American hippie cuisine, with the bread and the sunflower seeds and the broccoli.  I would keep going and going. But today my cuisine is more and more simple.  You want the person cooking it to really make it.  I’m there to be a coach to the person cooking at home.

On what to do when your ingredients are less than stellar:

One trick is the ultimate culinary cheap shot.  Go for the best olive oil you can afford, or roasted nut oil.  With really good garlic and really good oil, you can rescue a dull vegetable.

You can blanch it first, squeeze it out and finish it in the garlic and oil. Or roast. Roasting will help almost anything, cut lengthwise into elegant long wedges…  You can rescue disappointing fruit – you know, “melon-shaped objects” – with some kind of acid and some kind of sweetener, vinegar and honey.

And it’s not a crime to use frozen vegetables!  You make do, you fry an onion.  A lot of it is in the cut.  If you cut it smaller, there’s more surface area, and you can let the onions carry the day.

I’ve never been on a mission to get people to stop eating meat. I’m not a vegetarian myself, I eat a little bit of meat.

Very few people are saying “vegetarian” these days.  I have two problems with the term “vegetarian”.  1) Over the years, it became a statement about meat – you know, “keep it away from my plate!” Or, “as long as it’s not meat”- and 2) self-described vegetarians weren’t eating any vegetables.  The no-vegetables part of that was making me crazy.

I would rather see the label applied to the food, not the person.  It’s a “vegetarian” plate of food, but guess what! everyone’s allowed to eat it.

I’m finding that so many more people are really interested in vegetarian foods now. I worked with Harvard Dining Services to create modular vegetarian stations, like a panzanella station – tomatoes, olives, onions, or a naan and curry station, or an Asian noodle bowl station. And there’s a food literacy lesson embedded with each one.

But really I want to give credit to the vegetables. In general, produce itself has gotten so much better. When I first started, I was cooking for a high-end restaurant. It was hard to find a bottle of real olive oil – and my mother had never seen an artichoke or an avocado.

People ask why Moosewood has a lot of brown rice, lentils, noodles – we couldn’t have a produce-based restaurant in New York in winter.  It’s what we had.  Halfway through, I moved back to San Francisco, which was so different.  I decided I never wanted to write a cookbook that’s just for people on one coast or the other.

But things have really changed.  The produce is just better.

On what’s new about The Heart of  the Plate:

This is my first really new collection of vegetarian recipes since the late 90’s, when Vegetable Heaven came out.  Since then, I’ve written 2 more children’s books, a weight loss book, a breakfast book – lighter-weight books.

I never wanted to do photographs, but I had created this slideshow presentation to give a few times a year to these culinary/medical conferences.  My editor, Rux Martin, said, “Do your photos, do your voice, put it all in there”. It’s funny, I identify as an illustrator more than a cook. I was doodling – my work was in journals, storyboards, pieces of paper I was making into collages – and Rux said, “I want those to be your endpapers”.

I haven’t had that much time to evolve as an artist. You know, a cookbook at the end of the day is a technical manual – it’s controlled experiments, over and over.  Inspiration?  It’s not like being struck by lightning…you go in the kitchen and do the math!

On the book’s title:

I’m kind of anti-entree.  I like to combine different groupings, several things in the center of the plate.  Very plain food can be the bed, plus meaningful touches – combinations of different colors and meaningful toppings add nutrition and interest to the plate.  It’s a much more modular approach that I hope will enable people to share the same basic meal together.

If you could give your younger self, first starting out in the food world, some advice now, what would it be?

Have faith in your instincts, don’t forget to enjoy everything you do.  Don’t be fraught, don’t worry, and when in doubt go with delicious!  Also: just skip the low-fat decade – fat is fine! 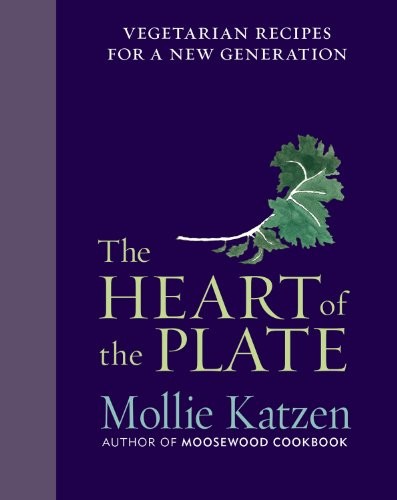