A while ago, I did a feature on literary cookbooks for kids.  It wasn’t that long ago, but in the months seen I’ve been seeing a special kind of book that doesn’t even pretend to be a cookbook, really – the picture book that’s all about food. Now, it’s not as though kids’ stories about food are anything new – whose childhood would be complete without Green Eggs and Ham, or Stone Soup, or In the Night Kitchen? (or newer classics like Cloudy with a Chance of Meatballs, for that matter)

But the newer books, like Pizza in Pienza, are singlemindedly fixated on food, and no matter how fantastic the story, the food is definitely non-fiction.   Pizza in Pienza will not only teach you what goes into pizza – it’ll give you a culinary history lesson too. 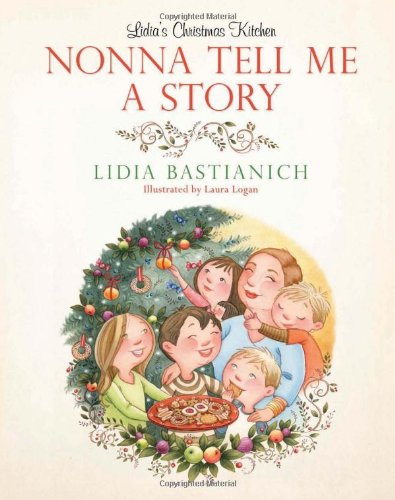 Lidia Bastianich has launched what looks to be shaping up into a series of children’s books, starting with Nonna Tell me a Story (2010) and Nonna’s Birthday Surprise (2013).  They’re beautifully produced, and if they seem a little surreal, it’s only because we adults know Lidia for a hard-driving, no-nonsense kitchen entrepreneur rather than the warm and fuzzy, soft-focus grandma she plays in these books. 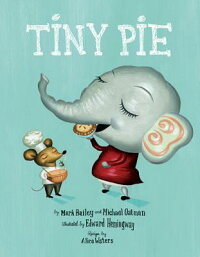 But all in all, I think my favorite of the recent batch of picture books has been Tiny Pie, which, like so many books, is connected to the food world only by the glue of Alice Waters, who wrote the book’s recipe for pie.  No matter that the recipe, when you look closely, does not yield a product that matches the illustrations (the recipe’s a sort of crostata; the book’s pictures show a traditional double-crust pie).  It’s still charming, and the heroine, a young elephant named Ellie, is winsome to a fault.

The kids took to it – and Ellie’s rallying cry, “Oopa-doopa-doo!” the moment they spotted it lying on the table with the rest of the day’s mail. As for me, I forgot about it.

One day a few weeks later, I found myself  using up some leftover ingredients to make an impromptu dessert.  Pretty cute, I thought to myself.  But it was when I brought my rhubarb lattice confection to the table that the cry went up.  “Tiny pie!  Tiny pie!” shouted both children.  “Oopa-doopa-doo!”  And so it was.   Piping hot though they were, the pies were devoured in 30 seconds flat.  Oopa-doopa-doo, indeed.