Cakes from the Dark Side

The other day I got a serious problem in the mail.  I was briskly opening up boxes and bags of new fall cookbooks when–blam!–there it was, staring up at me with an evil expression.  Twisted Cakes, it read, and beneath that was a Technicolor splurge of frosting which swiftly resolved into a hideous, grinning clown-face that didn’t even pretend not to be sinister.  [I’m not dropping the picture into the post.  It was all I could do to go get the link!]  I shrieked and turned the cover face-down on the treadmill.

When my son was little, he suffered from a violent case of koulrophobia, which, as I’m sure you know, is fear of clowns.  The fear subsided as he grew, and I had thought our household was now quite able to face down a clown or two.  But I was wrong.

Very, very carefully, I picked up the book and stuck it in between two other books, and then stuck those inside a whole stack of books.  Holding the stack at arm’s length, I went upstairs and, with infinite pains, placed the books spine-out on my “Give Away” shelf.  I shut my eyes when I shelved the clown book, just in case, and then I mentally checked that off as my One Brave Thing for the day.

It still bothers me that it’s up there, but maybe I can get someone to take it off my hands soon.  I’m sorry to say it, but there is no way that book is ever going to get reviewed by me.  I don’t even know who the publisher is, and I’m not going to look. 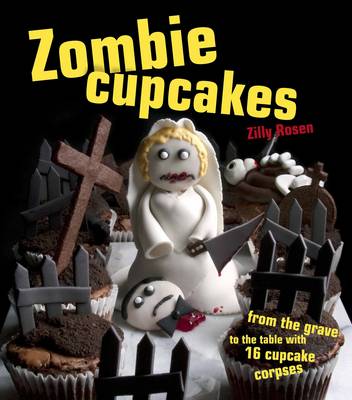 It’s not the first time this has happened to me, though it’s probably the worst.  I had similar problems with Zombie Cupcakes, even though the spirit of the picture is clearly really more silly than psycho.

I realize that this genre of confectionery–and it does constitute a whole genre, if a small one–is really meant for the young and ironic–the hipsters I once hung out with.  I realize that I probably lost a whole range of dark humor after having kids (it’s far too easy to visualize horrors as it is, once you’re a parent), and that I’m now probably abnormally sensitive to these sorts of things.  I realize this is probably one of the reasons I’m a food writer and not a film critic (I watched all of “The Sixth Sense” through a hole between my third and fourth fingers).

Part of me is a little bit sad that my camp sensibility seems to have permanently departed.  But the other part of me feels perfectly OK about watching scary movies from under a blanket and walking in a big circle around the spot where I know I put the clown cookbook.

How about you?  Is there, just possibly, anybody else out there who has had to shelve a cookbook with their eyes closed?!

[By the way, I realize this is really kind of a Halloween post. But hopefully by Halloween I’ll have something tastier to talk about, now that this is out of my system.]